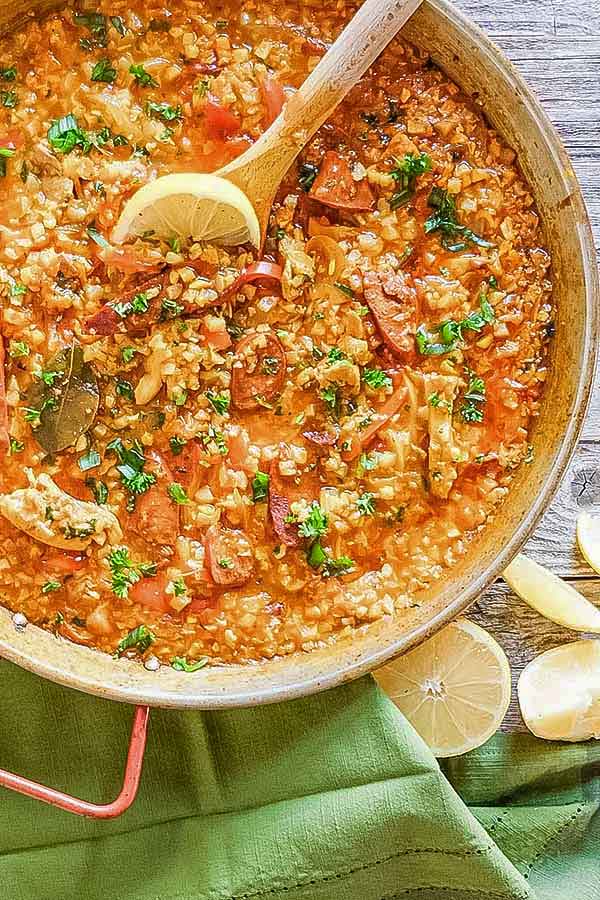 This chicken and chorizo cauliflower paella is an easy weeknight meal made in one skillet. Spain is famous for its paella dish which is typically made with rice, vegetables, chicken, chorizo and or seafood. In this recipe, I substituted cauliflower for the rice, making this a low carb meal. For protein, I used chicken and chorizo sausage, which is made of pork and is highly seasoned, adding a lot of flavour to this Spanish meal. Chorizo sausage is used mainly in Spanish and Mexican cuisine.

For extra flavour and a little heat, I used spices such as paprika, saffron, bay leaf and cayenne pepper. Saffron, often used in Spanish recipes, is especially delicious in paella because of its intense flavour. And let us not forget the impressive health benefits, saffron is a powerful antioxidant. This cauliflower paella dish is gluten-free, low carb, paleo and keto friendly. Paella is often served with roasted peppers, fried pimientos or bread. What I love about this recipe, it is quick and easy to prepare, and more importantly, it is made with cauliflower and not rice making this popular dish healthier and lower in carbs 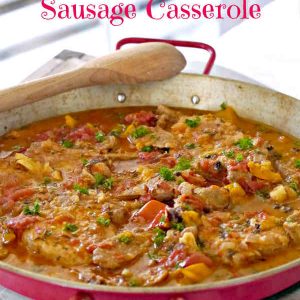 Spanish Pork and Sausage Casserole is a hearty dish flavoured with garlic, smoked paprika, caraway, bay leaves and wine. For the veggies, fresh tomatoes, bell peppers and onions. These are typical ingredients in Spanish cuisine because, in Spain, the food is uncomplicated and made with local and seasonal produce. The pork chops are tender and […] Read More 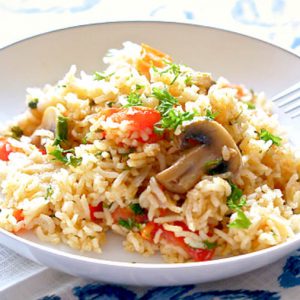 This Spanish rice recipe I discovered while I was travelling in Spain. Honestly, all I need is this rice and nothing else, it is so good! Rice is one of those ingredients that you can flavour with just about anything. In this recipe I used fresh veggies such as bell peppers, tomatoes, mushrooms, garlic and […] Read More 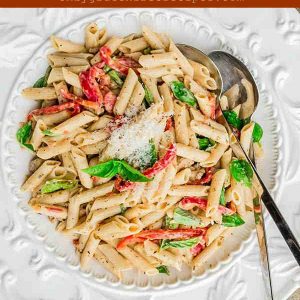 This Chorizo With Basil Cream Sauce Penne is an easy gluten-free pasta dish made in 30 minutes. The flavourful chorizo balls add spice and warmth, and the bell peppers and fresh tomatoes add freshness. But, it is the basil cream sauce that ties everything together. The sauce is made with chicken broth, cream, Parmesan cheese, […] Read More