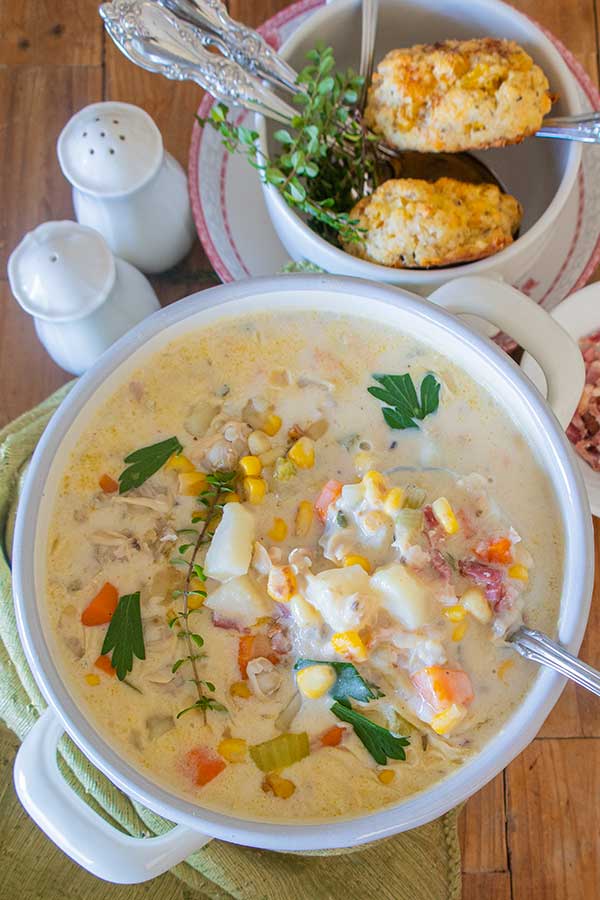 Thick and creamy supreme Clam Chowder filled with clams, potatoes, bacon, sweet charred corn and extra veggies. This recipe is not the classic New England clam chowder, but it is the clam chowder of all chowders. The broth is creamy but not heavy with a perfect balance of clams and potatoes and a hint of thyme. I also added a few carrots and celery for extra heartiness and sweet charred corn. The corn is what sets this chowder apart from most. 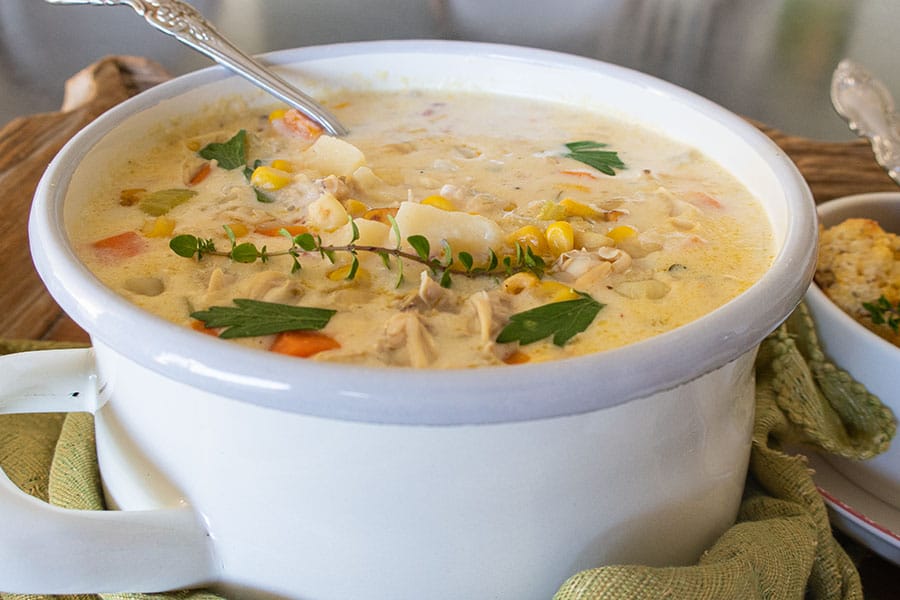 When I decided to create this white clam chowder recipe, I wanted more than just potatoes and clams and at the same time maintain its individuality. In come the veggies with the charred corn, making this clam chowder an adventure of textures and flavours. Every spoonful is filled with so much deliciousness.

What is the difference between Manhattan Chowder and New England Clam Chowder? 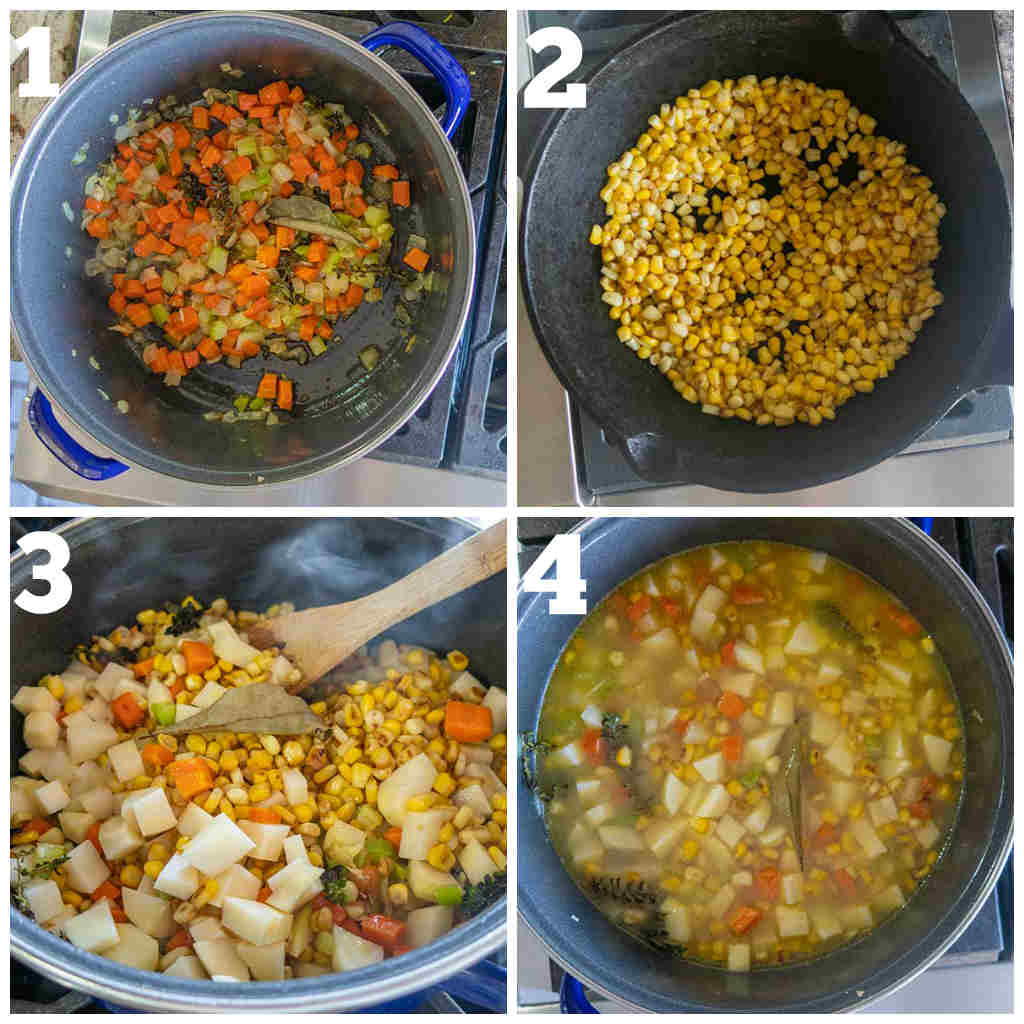 How to make charred corn kernels under 5 minutes

I learned this technique a very long time ago. Fresh corn is the best, especially when it is slightly charred because it has extra sweetness and is more flavourful. I often add charred corn to my soups and stews. To char the corn is super easy. Heat a large dry skillet like a cast-iron skillet over high heat, add the corn kernels and allow the corn to char without stirring it too often. It takes less than five minutes to char the corn. You could add some salt and cracked black pepper and eat it with a spoon. It is that good. This corn is also great when added to salsa or over nachos. You can use fresh or frozen corn, both char beautifully. 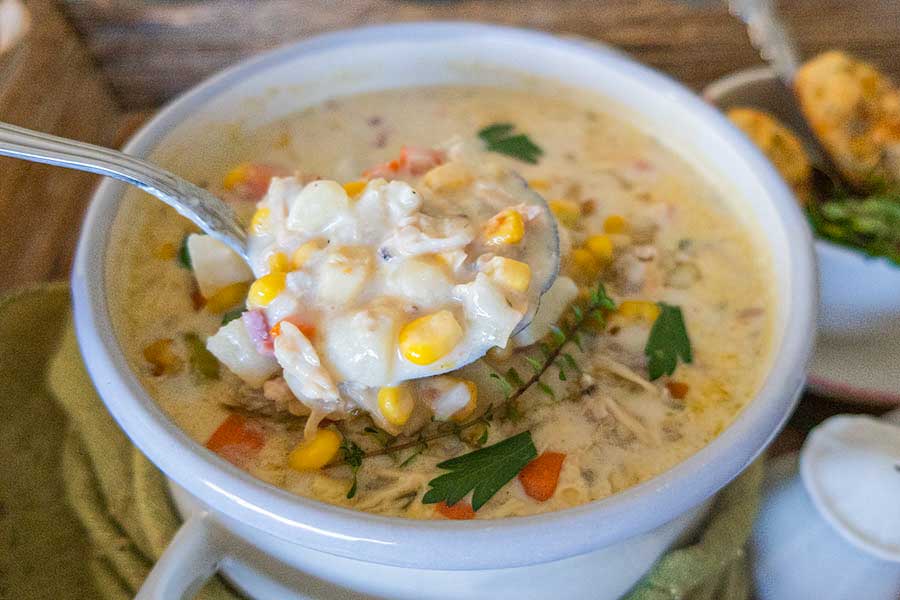 the details for the clam chowder recipe,

To start, crisp the bacon, then set the bacon aside for the very end. I add the bacon to the clam chowder at the end, keeping the bacon crispy and delicious. Once the bacon is done, using the same pot, add some butter and saute the onions, celery and carrots. Then stir in the herbs with garlic. Once everything is aromatic, add the potatoes, clam broth, charred corn and a little water. Cook for a brief ten minutes until the potatoes are tender. Since the potatoes are cut into small pieces, they take very little time to cook. 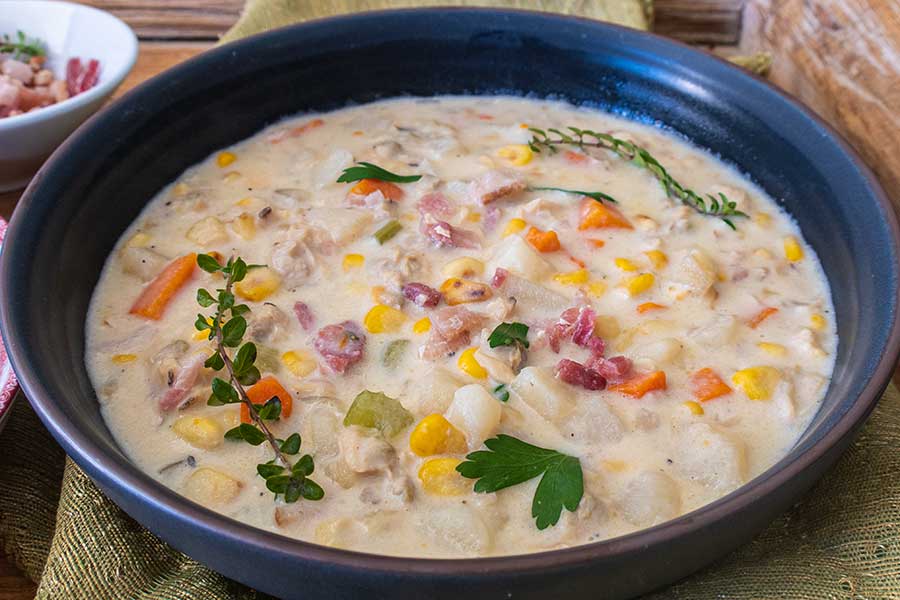 The next thing is to thicken the broth. The classic New England Chowder is thickened with flour. Since this is a gluten-free Clam Chowder, I used a grain-free starch mixed with the cream. You can use arrowroot or tapioca both work well. This cream mixture is added to the chowder with the clams and half the bacon bits. The chowder is cooked just until it starts to thicken. Season with salt and pepper, and it’s ready to be served. When I serve this creamy thick soup, I like to top the soup with bacon bits and fresh herbs.

This Clam Chowder is not a classic, but definitely comforting. Add a side of the freshly baked Gluten-Free Cheddar Corn Biscuits, and you have a meal that will satisfy even big appetites. Enjoy! 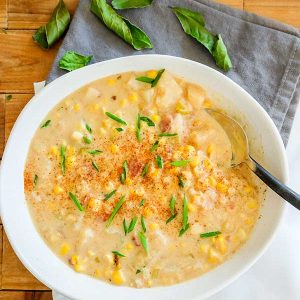 A crisp chill in the air is your cue to cook some hearty delicious chowders. Fresh corn, potato & leek chowder is one of my guilty pleasures. What could possibly be better then, charred sweet corn with potatoes and leeks in a thick creamy soup topped with freshly cooked crispy bacon crumbles? This exceptionally simple […] Read More 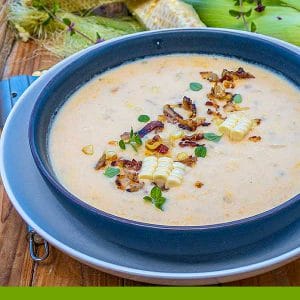 Cream of Fresh Corn Soup, I can honestly say that this is the best fresh corn soup! So easy to make with so much flavour. Corn soup!…definitely one of the most gentle yet hearty soups you can make. The smoky broth is combined with the creaminess of fresh corn, bites of bacon, caramelized onions, a […] Read More 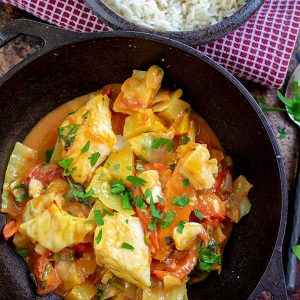 If you are looking for a new fish recipe, you will love this Caribbean fish curry made with vegetables and harmony of spices. This simple to prepare healthy fish curry dish goes well with rice or a cabbage and fennel citrus salad  Read More