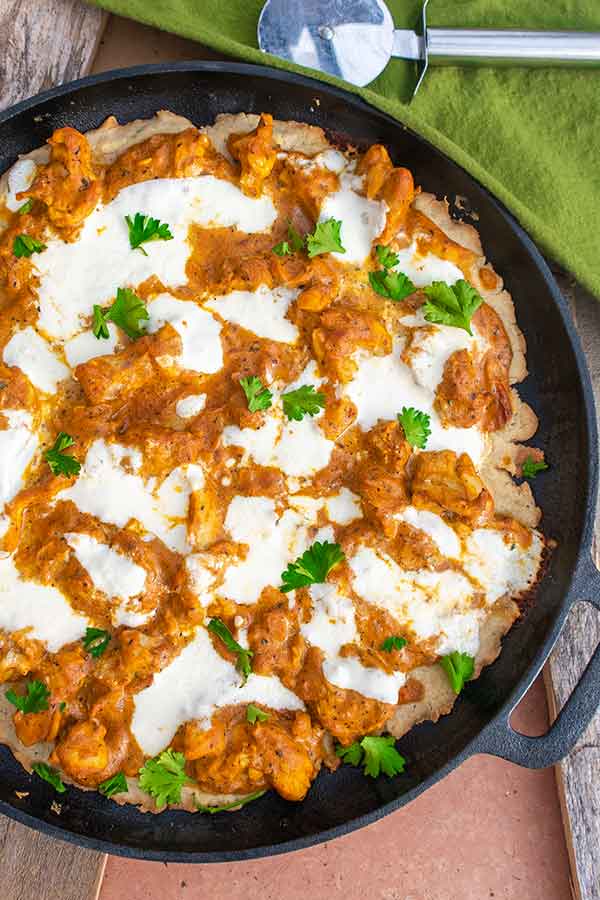 I don’t know where to start here! This cast iron pizza recipe is not your typical pizza. I combined Indian flavours with a classic crispy pizza crust. A little different, I know, but believe me, it is sooo good! If you love authentic food such as Indian, this pizza will satisfy both the pizza and the Indian cravings. 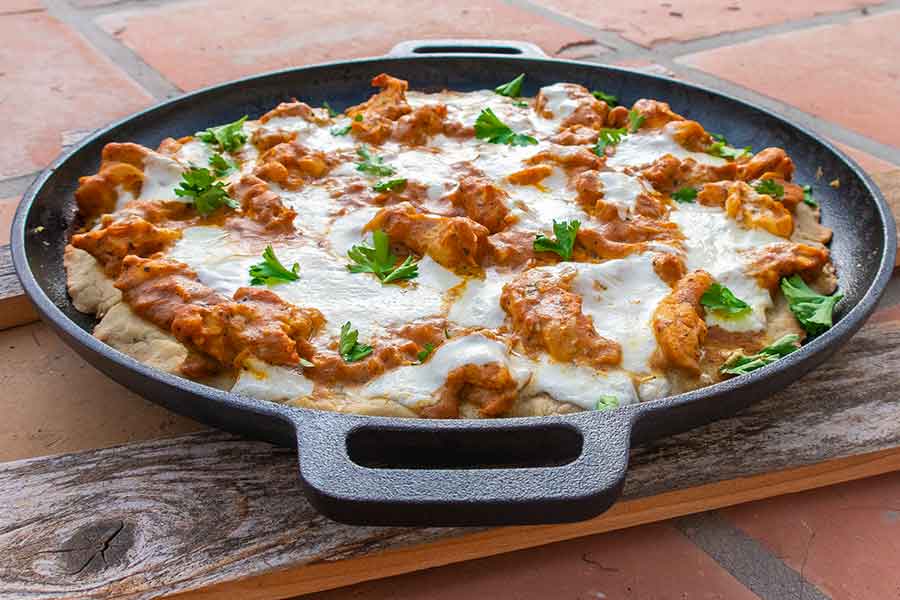 Today I wanted to share something different. I was getting tired of the same old classics. Indian food such as butter chicken is often served with naan bread, so why not butter chicken on a pizza?

To keep the sauce extra creamy, I topped the pizza with buffalo mozzarella. Yes, you could use mozzarella cheese, but it will not give you the creaminess. I feel that the cheese made this pizza extra special. 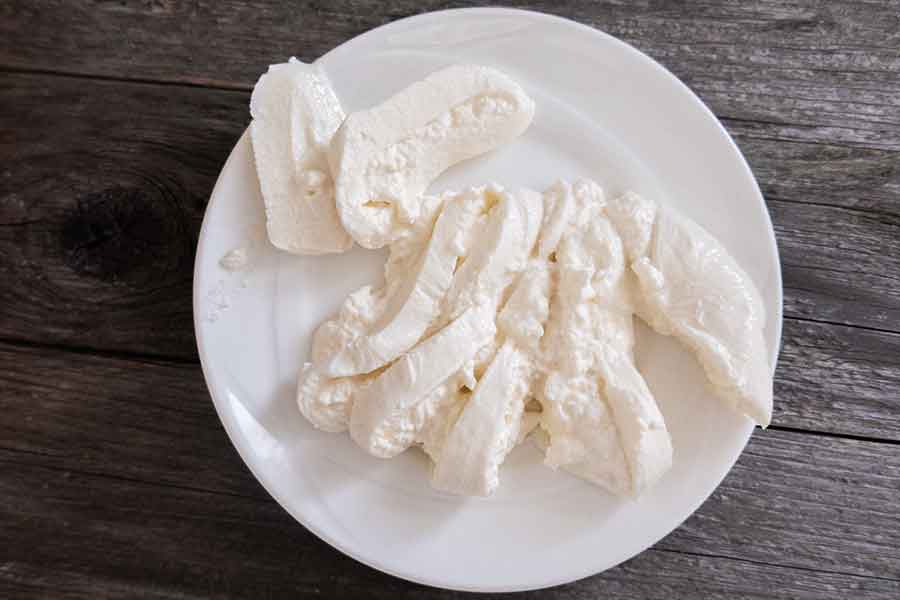 Difference between mozzarella and buffalo mozzarella?

To date, I have not found a better way to make gluten-free pizza crust than the one I made today on a cast iron pizza pan. When it comes to gluten-free pizza, because the dough doesn’t have gluten, which is vital in making pizza, the pizza will not crisp up as beautifully as if you were making a pizza crust with gluten. This is where the cast iron pizza pan comes in.

Cast iron pizza pan comes with a thicker base for excellent heat retention and an even heat distribution to create that crispy restaurant-style crust you could only get if the pizza is made in a pizza oven. The cast-iron pan fortifies food with iron, which helps in your iron intake an essential mineral that our body needs.

When the cast iron pan is properly seasoned, it forms a non-stick surface allowing you to cook with less fat. And the best part about this cast iron pizza pan is that you can use it to make tortillas, quesadillas, and eggs.

The cast iron pan is also excellent for searing, grilling, broiling, roasting, BBQ grills and even open campfire. I wish I got mine earlier because there are so many uses for this easy to clean and maintain cast iron pan. 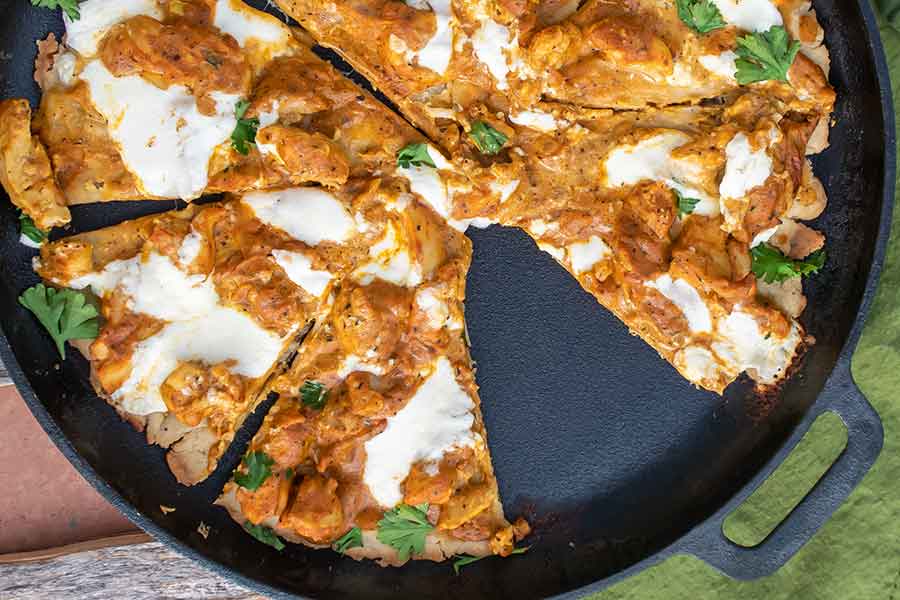 What if you don’t have a cast iron pizza pan?

I would recommend using a pizza pan with a perforated surface, pizza stone or cast-iron skillet. But I can honestly say this cast iron pizza pan has become my favourite kitchen essential.

Now for the gluten-free pizza recipe,

I used my easy go to gluten-free, yeast free pizza dough in this butter chicken pizza recipe. I like using a simple pizza dough when the topping is rich and flavourful. Plus, the dough is super easy to whip up, virtually five minutes. 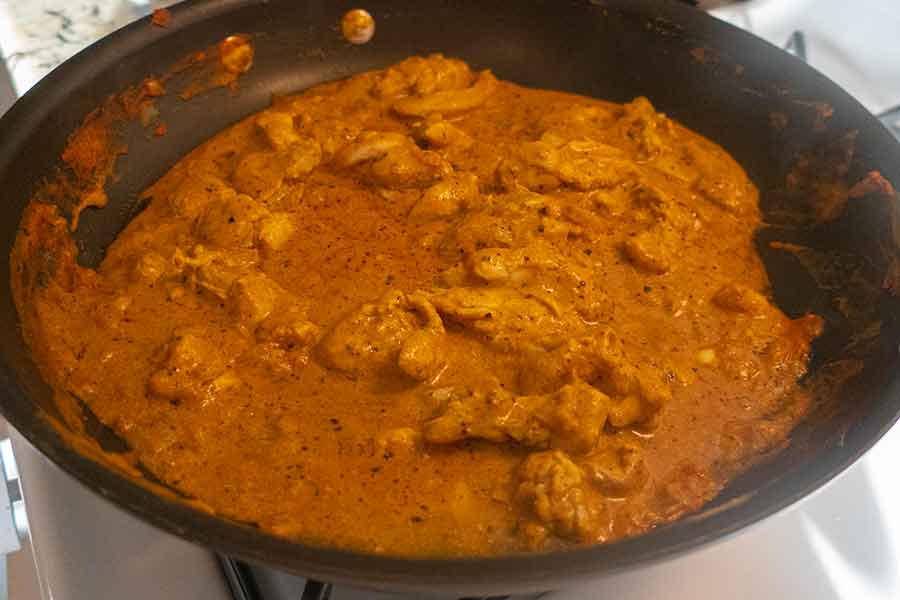 For the butter chicken pizza topping,

As I mentioned earlier, this is not your typical pizza – it is better! To make the butter chicken topping is super easy. First, you marinate the chicken in an Indian spiced yogurt marinade. While the chicken is marinating, make the sauce by sauteing onions, then add spices, tomatoes, coconut milk and lime juice. Once the sauce starts to simmer, transfer the chicken with the marinade into the sauce and cook for 10 minutes. Done. 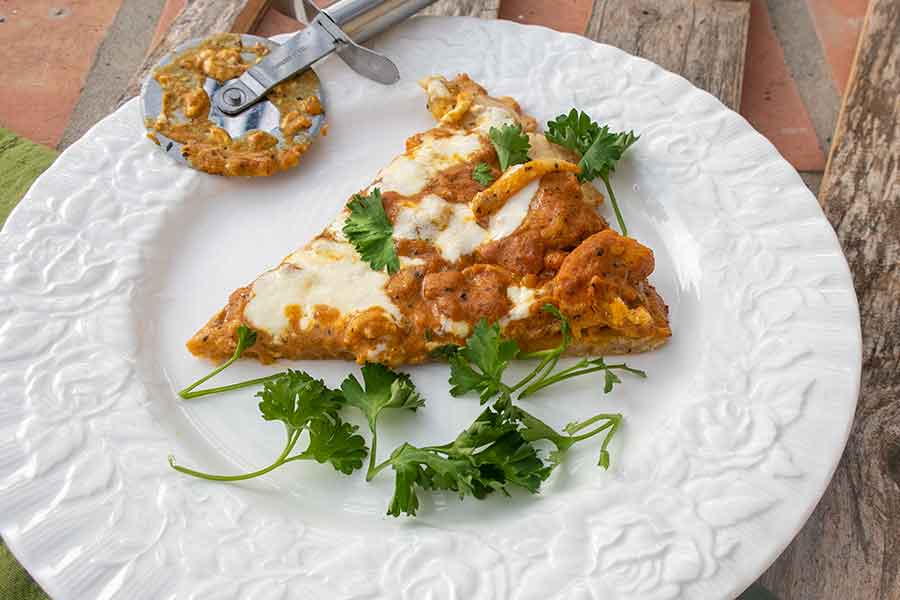 I pre-bake the pizza crust for 10 minutes before I add the topping. The reason I did this, it kept the crust deliciously crunchy without becoming soggy. Then the final topping, my favourite buffalo mozzarella, makes everything creamier and super flavourful. It is like adding cream to the butter chicken. It doesn’t get any better than this 🙂 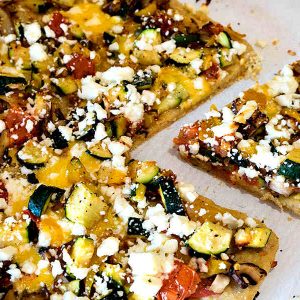 When it comes to a great pizza, it is all about the crust. After trying many different combinations of ingredients, I have finally developed the perfect gluten free pizza crust. The crust is crispy on the outside and soft on the inside. The best part is, there is no yeast and no kneading necessary. I […] Read More 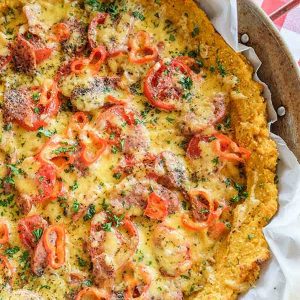 A gluten-free pizza made with a butternut squash crust. A pizza crust doesn’t have to be made only with grains. In today’s world, a healthy approach to making pizza is adding vegetables to the crust. In this recipe, I used butternut squash, adding valuable nutrients and fibre.      Why use squash to make pizza crust? […] Read More 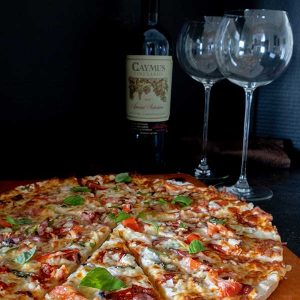 A fresh homemade pizza in minutes with this Gluten-Free Yeast-Free Thin Crust Pizza recipe. The thin crust pizza dough has no yeast, so there is no waiting for the pizza dough to rise. The pizza crust is crispy and soft on the inside, just like a delicious pizza from an Italian bakery. The crust is […] Read More