This Moroccan-Style Baked Lamb Casserole is an indulgent dish that is fragrant and spicy but not excessively hot. The effect is exotic but not overpowering. This warming lamb casserole is layered with lamb, potatoes, collards and cheese, then baked in light cream. The stunning flavours come from an array of spices such as coriander, cinnamon, cumin, ginger, garlic and cayenne pepper. The exotic taste more than delivers on expectations.

What is Moroccan cuisine?

Authentic Moroccan food is created from a mix of cuisines and cultures from around the world. Morocco’s food is famous for its legendary tagine recipes and delicious stews. Tagine is a cone-shaped dish with a lid and is made from unglazed clay or ceramic. If I were to describe a meal made in a tagine, it would be a casserole or a stew. The dish consists of layered meat, vegetables, and spices cooked in an aromatic sauce offering a unique earthy flavour. The closest pot to a tagine would be a dutch oven, but the meal won’t be the same because it will lack that earthy flavour you get from unglazed clay tagine. In this Moroccan-style lamb casserole, I tried to capture the flavour and texture of a traditional tagine dish without using a tagine. I have added a personal touch to this recipe by using cheese and cream. Dairy is rarely used in traditional Moroccan cuisine, but int his recipe adding cheese and cream made the dish exceptionally delicious! If you like you can serve simple herb rice with this natural gluten-free meal.

This lamb is slowly cooked with vegetables in a delicious sauce seasoned with Italian herbs. The lamb is so tender it will melt in your mouth. Serve with acorn squash and sweet potato mash or just simple mashed potatoes         Read More 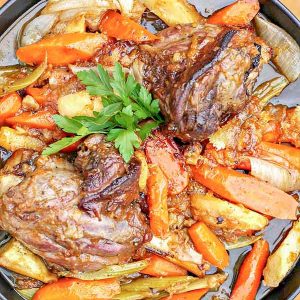 Here is a main course that is comforting with oodles of flavour. With plenty of vegetables, light seasoning and a lamb shank finished with a honey glaze, this dish is a winner! Serve with mashed potatoes Read More 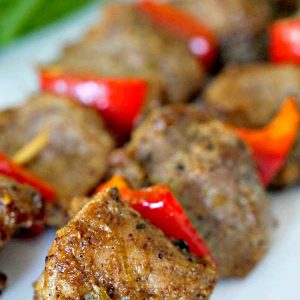