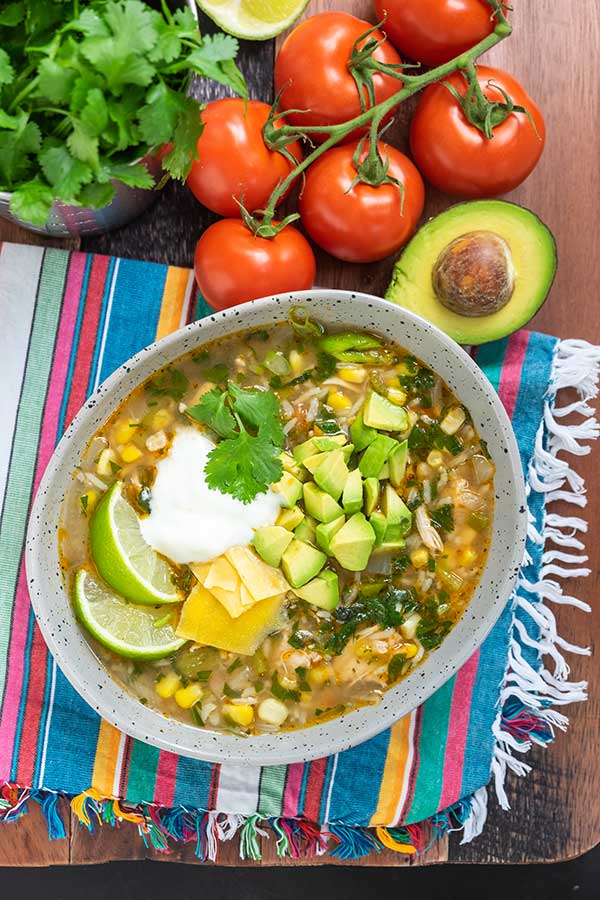 This Mexican Chicken Rice Soup is anything but boring – The soup is made with fresh poblano peppers, tomatoes, chicken, corn, onions, garlic, jalapeno peppers, fresh spinach and of course rice. For flavours, I used typical Mexican spices such as cumin, chilli powder and oregano. To finish the soup, I added fresh cilantro and lime juice. This soup to me is → happy food 🙂

Chicken and rice is a classic soup combination, perfect when you need a pick me up or feeling under the weather. This soup delivers healing properties making you feel cozy all over. It’s a perfect everyday healthy soup.

To start, the rice has to be cooked first. You may ask why not cook it in the soup with everything else? The reason is, if you add the uncooked rice into the soup, the rice will absorb most of the broth, and you will have a risotto instead of soup. Then again, if you added just boiled rice to the soup, although the soup broth is flavourful, the plain rice will make the soup bland. So, the rice has to be cooked in a flavourful broth first.

You can cook the rice in a chicken broth, but it is not necessary if you add cumin, bay leaf and lime zest as it calls in this Mexican chicken rice soup recipe. The rice will be so flavourful you will want to eat it without adding it to the soup.

For the soup, it is pretty straightforward, except for the poblano peppers. If you can’t find poblano peppers use green peppers. For the peppers, we must remove the skin. To do this, place the peppers under a broiler or open flame until they start to char. Then, once they are slightly cooled, the skin comes off very easily. Remove the seeds and chop. For the chicken it must have bones, I used thighs, the meat is juicier than the breast. It is mostly the bones that flavour the broth, this is why you don’t have to add store-bought chicken broth. The bones are later removed, and the chicken meat is chopped.

At the very end, the cooked rice is added. The soup is brought to a boil and then immediately removed from the heat. Now you add the cilantro, spinach and lime juice. And this is how you make the best Mexican chicken rice soup.

But, we mustn’t forget about the toppings, because this soup is a meal in a bowl once you add the various fresh toppings. Enjoy!

One of my other Mexican soup favourites is the fajita chicken soup. 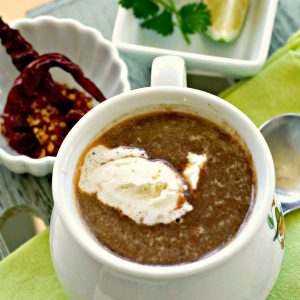 Here is a hearty gluten free vegetarian tortilla soup made under 25 minutes. The beauty of this deliciously spiced soup is its subtle taste and creamy texture. This scrumptious tortilla soup will satisfy your craving for Mexican food every time!   Read More 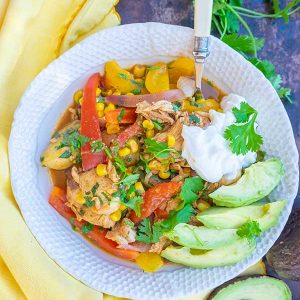 The Chicken Fajita Stew is a refreshing twist on tex-mex food. In this quick and healthy gluten-free meal, the chicken is marinated in fresh lime juice, Mexican spices and then seared until the chicken is crusted with the most delicious coating. Then come the fresh vegetables like bell peppers, red onions and tomatoes. They are […] Read More

Mexican Street Corn Soup is the best way to wrap up summer recipes. The flavours of sweet summer corn, spicy smoked chipotle peppers, cumin, chili powder, coriander and fresh cilantro make this the most delicious corn soup. The gluten-free savoury soup is thick and creamy with a little spicy and tangy flavour. The corn is […] Read More