Back to Gluten-Free Favourites 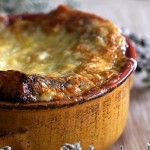 There is something about slowly cooked onions, the flavour and the aroma is magnificent. When it comes to making the best French onion soup, it is all about not to rush the browning of the onions. You may think that creating that flavourful broth with tender onions is complicated. Honestly, this soup is one of the simplest soups, but it takes time. You can’t rush the caramelization of the onions. This is where the flavour comes from and, of course, many onions.

First, you add butter, olive oil, garlic, onions and some water to a large soup pot. Cover and cook for a few minutes until the onions soften. By now, the water would have evaporated. Now starts the process of slowly getting to caramelize the onions. To do this, the heat is at low temperature, and you must stir the onions frequently. Trust me on this, it is well worth the time. Whenever I made the French onion soup, I also do some baking, this way, I am in the kitchen anyway to keep my eye on the onions. Once the onions turn into a golden colour, we add the seasoning. Some brandy, bay leaf, thyme, beef broth, salt and pepper. Now all you have to do is, simmer the soup for an additional 15 minutes, infusing the broth with the flavours of caramelized onions, brandy and spices. Nex is the easy part, ladle soups into oven-proof bowls, top with a round slice of toasted gluten-free French bread and plenty of Gruyere cheese or cheese of choice. Place bowls on a baking sheet and broil until the cheese has melted and is bubbling. That’s it! Not complicated, but it takes time. And, as I said before, it is well worth it, because the soup is outstanding. I find the soup is so hearty that it can replace the main dish.

What region of France does French onion soup come from?

It has been documented that this flavourful soup goes back as far as the 18th century first enjoyed in the champagne region. Interestingly it has been used as a hangover cure. The modern version of this soup originates in Paris. Serving this soup in the Classic Fine White Porcelain Lion’s Head Bowl makes it elegant and extra special. Because I wanted to give the soup a rustic look, I served the soup in French Onion Soup Crocks 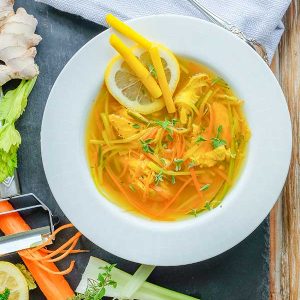 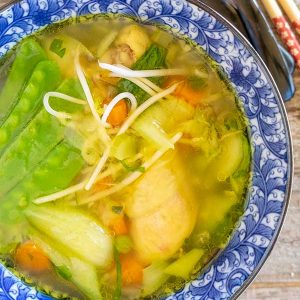 I am very excited about this Asian Chicken Soup Recipe. When we crave comfort, curling up with a hot bowl of delicious chicken soup and a good book is just what we need.  There are many versions of chicken soup depending on the spices, herbs and vegetables used in each recipe. Some even call for […] Read More 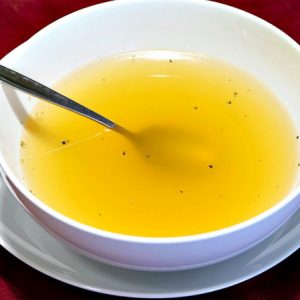 Stock Or Broth, What Is The Difference? Stock is mostly bones, a little meat and basic vegetables such as carrots, celery, onions and parsley that are placed in water and simmered uncovered for up to 12 hours or more which is what intensifies the flavour and tastes meaty. When stock is cooled it becomes thicker […] Read More